The Lady of Loué Bringing Her Husband The Basin Of Water

The Heptameron - Day 4, Tale 37 - the Lady of Loué Bringing Her Husband The Basin Of Water

The Lady of Loué so influenced her husband by her great patience and longsuffering, that she drew him from his evil ways, and they lived afterwards in greater love than before.

There was a lady of the house of Loué (1) who was so prudent and virtuous, that she was loved and esteemed by all her neighbours. Her husband trusted her, as well he might, with all his affairs, and she managed them with such wisdom that his house came, by her means, to be one of the wealthiest and best appointed in either the land of Anjou or Touraine.

1 Loué is in Anjou, in the department of the Sarthe, being the chief locality of a canton of the arrondissement of Le Mans. The Lady of Loué referred to may be either Philippa de Beaumont-Bressuire, wife of Peter de Laval, knight, Lord of Loué, Benars, &c.; or her daughter-in-law, Frances de Maillé, who in or about 1500 espoused Giles de Laval, Lord of Loué. Philippa is known to have died in 1525, after bearing her husband five children. She had been wedded fifty years. However, the subject of this story is the same as that of the Lady of Langallier, or Languillier (also in Anjou), which will be found in chapter xvii. of Le Livre du Chevalier de la Tour-Landry, an English translation of which, made in the reign of Henry VI., was edited in 1868 by Mr. Thomas Wright for the Early English Text Society.—See also Le Roux de Lincy's Femmes célčbres de l'ancienne France, vol i. p. 356. Particulars concerning the Laval- Loué family will be found in Duchesne's Histoire de la Maison de Montmorency.—L. and M.

In this fashion she lived a great while with her husband, to whom she bore several handsome children; but then, as happiness is always followed by its opposite, hers began to be lessened. Her husband, finding virtuous ease to be unendurable, laid it aside to seek for toil, and made it his wont to rise from beside his wife as soon as she was asleep, and not to return until it was nearly morning. The lady of Loué took this conduct ill, and falling into a deep unrest, of which she was fain to give no sign, neglected her household matters, her person and her family, like one that deemed herself to have lost the fruit of her toils, to wit, her husband's exceeding love, for the preserving of which there was no pain that she would not willingly have endured. But having lost it, as she could see, she became careless of everything else in the house, and the lack of her care soon brought mischief to pass.

Her husband, on the one part, spent with much extravagance, while, on the other, she had ceased to control the management, so that ere long affairs fell into such great disorder, that the timber began to be felled, and the lands to be mortgaged.

One of her kinsfolk that had knowledge of her distemper, rebuked her for her error, saying that if love for her husband did not lead her to care for the advantage of his house, she should at least have regard to her poor children. Hereat her pity for them caused her to recover herself, and she tried all means to win back her husband's love.

In this wise she kept good watch one night, and, when he rose from beside her, she also rose in her nightgown, let make her bed, and said her prayers until her husband returned. And when he came in, she went to him and kissed him, and brought him a basin full of water that he might wash his hands. He was surprised at this unwonted behaviour, and told her that there was no need for her to rise, since he was only coming from the latrines; whereat she replied that, although it was no great matter, it was nevertheless a seemly thing to wash one's hands on coming from so dirty and foul a place, intending by these words to make him perceive and abhor the wickedness of his life. But for all that he did not mend his ways, and for a full year the lady continued to act in this way to no purpose.

Accordingly, seeing that this behaviour served her naught, one day, while she was waiting for her husband, who tarried longer than ordinary, she had a mind to go in search of him, and, passing from room to room, found him at last in a closet at the back of the house, lying asleep by the side of the ugliest, vilest, and filthiest serving-woman they had.

Thereupon, thinking she would teach him to leave so excellent a wife for so filthy and vile a woman, she took some straw and set it on fire in the middle of the room; but on seeing that it would as soon kill her husband as awaken him, she plucked him by the arm, crying out—

If the husband was ashamed and sorry at being found by so virtuous a wife in company with such a slut, he certainly had good reason for it. Then said his wife to him—

"For a year, sir, have I tried by gentle and patient means to draw you from this wickedness, and to show you that whilst washing the outside you should also cleanse that which is within. Finding that all I could do was of no avail, I have sought assistance from that clement which brings all things to an end, and I promise you, sir, that, if this do not mend you, I know not whether I shall a second time be able to deliver you from the danger as I have now done. I pray you remember that the deepest despair is that caused by love, and that if I had not had the fear of God before my eyes I could not have endured so much."

The husband, glad to get off so easily, promised that he would never again cause her any pain on his account. This the lady was very willing to believe, and with her husband's consent turned away the servant who had so offended her. And from that time forth they lived most lovingly together, so that even the errors of the past, by the good that had resulted from them, served but to increase their happiness. 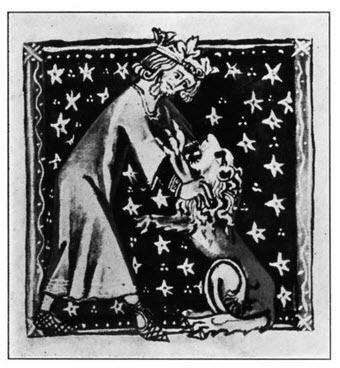 "Should God give you such husbands, ladies, I pray you despair not until you have fully tried all means to win them back. There are twenty-four hours in the day in which a man may change his mind, and a wife who has gained her husband over by patience and longsuffering should deem herself more fortunate than if fate and her kinsfolk had given her one more perfect."

"It is an example," said Oisille, "that all married women ought to follow."

"Follow it who will," said Parlamente; "for my own part, I should find it impossible to be patient so long. Although in every condition patience is a seemly virtue, yet I think that in wedded life it finally produces ill-will. For, when suffering is caused you by your partner, you are compelled to keep yourself as much apart from him as possible; and from such estrangement there springs up contempt for the faithless one; and this contempt gradually lessens love, for a thing is loved in proportion as it is esteemed."

"But there is a danger," said Ennasuite, "that the impatient wife may meet with a passionate husband who, instead of patience, will bring her pain."

"And what more," said Parlamente, "could a husband do than was done by the husband in the story?"

"What more?" said Ennasuite. "Why, beat his wife soundly, and make her lie in the smaller bed, and his sweetheart in the larger." (2)

2 At this period, and for some time afterwards, there were usually two beds in the master's room, a large one for himself and his wife, and a small one in which slept a trusty servant, male or female. These little beds are shown in some of the designs engraved by Abraham Bosse in the seventeenth century.—L.

"It is my belief," said Parlamente, "that a true woman would be less grieved by being beaten in anger than by being contemned for one of less worth than herself. After enduring the severance of love, nothing that her husband could do would be able to cause her any further pain. And in this wise the story says that the trouble she took to regain him was for the sake of her children—which I can well believe."

"And do you think that it showed great patience on her part," said Nomerfide, "to kindle a fire beneath the bed on which her husband was sleeping."

"Yes," said Longarine; "for when she saw the smoke she waked him, and herein, perhaps, was she most to blame; for the ashes of such a husband as hers would to my thinking have been good for the making of lye."

"You are cruel, Longarine," said Oisille, "but those are not the terms on which you lived with your own husband."

"No," said Longarine, "for, God be thanked, he never gave me cause. I have reason to regret him all my life long, not to complain of him."

"But if he had behaved in such a manner towards you," said Nomerfide, "what would you have done?"

"I loved him so dearly," said Longarine, "that I believe I should have killed him, and myself as well. To die after taking such a vengeance would have been sweeter to me than to live faithfully with the faithless."

"So far as I can see," said Hircan, "you do not love your husbands except for your own sakes. If they are what you want them to be, you are very fond of them; but if they fall into the slightest error towards you, they lose on a Saturday the toil of an entire week. Thus you are minded to rule, and I for my part will consent to it provided, however, that all other husbands agree."

"It is reasonable," said Parlamente, "that man should rule us as our head, but not that he should forsake us or treat us ill."

"God has provided so wisely," said Oisille, "both for man and for woman, that I hold marriage, if it be not abused, to be the goodliest and securest condition imaginable, and I am sure that, whatever they may seem to do, all here present think the same. And if the man claims to be wiser than the woman, he will be the more severely blamed should the fault come from him. But enough of such talk. Let us now see to whom Dagoucin will give his vote."

"You do me a great pleasure," she replied, "for I have read a story that is worthy to follow yours. Since we are set upon praising the virtuous patience of ladies, I will show you one more worthy of praise than she of whom we have just been speaking. And she is the more deserving of esteem in that she was a city dame, and therefore one of those whose breeding is less virtuous than that of others."