Madame de Roncex, while at the monastery of the Grey Friars at Thouars, (1) was constrained to go in great haste to a certain place, and, not looking to see whether the seats were clean, sat down in a filthy spot and befouled both her person and clothes; whereupon crying out for assistance, in the hope that some woman would come and cleanse her, she was waited on by men, who beheld her in the worst plight in which a woman could be found. (2)

Tale 11 of the Heptameron

In the household of Madame de la Trémoille there was a lady named Roncex, who one day, when her mistress had gone to visit the monastery of the Grey Friars, found herself in great need to go to a certain place whither her maid could not go in her stead. She took with her a girl named La Mothe to keep her company, but being modest and unwilling to be seen, left her in the room, and went alone into a darksome privy, a place used in common by all the friars, who had given such a good account therein of all their victuals, that seat and floor, and in sooth the whole place, were thickly covered with the must of Bacchus and Ceres that had passed through the friars' bellies.

The unhappy lady, who was so hard pressed that she had scarcely time to lift her dress, chanced to sit down in the foulest, dirtiest spot in the whole place, where she found herself stuck fast as though with glue, her poor hips, garments, and feet being so contaminated that she durst not take a step or turn on any side, for fear lest she should meet with something worse. Thereupon she began to call out as loudly as she could—

"La Mothe, my child, I am ruined and undone!"

The poor girl, who had formerly heard tell of the wickedness of the Grey Friars, and imagined that some of them were hidden there and were trying to take her mistress by force, thereupon ran off as hard as she could, saying to every one she met—

"Come and help Madame de Roncex; the Grey Friars are trying to ravish her in yonder privy."

They thereupon hastened thither with all speed, and found the unhappy lady crying out for assistance, longing for some woman to come and cleanse her, and with her back parts all uncovered, for she feared to touch them with her garments lest these also should be defiled.

The gentlemen, coming in at her cries, beheld this fine sight, but could see nought of the Grey Friars, unless it were their ordure clinging to her hips; nor did this pass without laughter on their part and great shame on hers, for instead of having women to cleanse her, she was waited on by men, who saw her naked, and in the sorriest plight in which a woman could be found. For this reason, on perceiving them, she soiled what was still clean, by dropping her garments in order to cover herself, forgetting the filth that she was in for the shame she felt at sight of the men. And when she had come out of that foul place it was necessary to strip her naked and change all her garments before she could leave the monastery. She was minded to be angry with La Mothe for the aid that she had brought her, but finding that the poor girl had thought her in a yet more evil plight, she put aside her wrath and laughed like the rest. (3)

"I think, ladies," said Nomerfide, "that this story has proved neither long nor melancholy, and that I have given you what you expected."

At this the company laughed heartily, and Oisille said—"The story is indeed nasty and unclean, yet, knowing the persons who fared in this manner, we cannot consider it unwelcome. Gladly would I have seen the faces of La Mothe and of the lady to whom she brought such timely aid. But now," she added to Nomerfide, "since you have finished so soon, give your vote to some one whose thoughts are of a graver turn."

"Since you desire me to atone for my fault," answered Nomerfide, "I give my vote to Dagoucin, whose discretion is such that he would die rather than say anything foolish."

Dagoucin then thanked her for the esteem in which she held his good sense, and thus began—"The story I am minded to relate is intended to show you how love blinds the greatest and most honourable hearts, and how hard it is to overcome wickedness by any kindness whatsoever."

Of the jests made by a Grey Friar in his sermons. (4)

Near the town of Bléré in Touraine there is a village called St. Martin-le-Beau, whither a Grey Friar belonging to the monastery at Tours was summoned to preach during the seasons of Advent and Lent. This friar, who was more garrulous than learned, and now and then found himself at a loss for matter to eke out his hour, would thereupon begin telling tales which more or less agreeably satisfied the good villagers.

One Holy Thursday he preached about the Paschal Lamb, and while speaking of how it was eaten at night, seeing that there were present at the preaching some handsome young ladies of Amboise, who were newly arrived to keep Easter at the village, and to stay there for a few days afterwards, he wished to surpass himself, and thereupon asked all the women-folk whether they knew what it was to eat raw flesh at night. "I will tell you what it is, ladies," he said, whereat the young men of Amboise, who had just arrived with their wives, sisters, and nieces, and who had no knowledge of the pilgrim's humour, began to be scandalised; though on listening further their indignation gave place to laughter, even when he said that to eat the lamb it was needful to have one's loins girt, one's feet in one's shoes, and one's hand on one's staff.

The friar, seeing them laugh at this, and guessing the reason, immediately corrected himself. "Well," said he, "to have shoes on one's feet and a staff in one's hand; 'tis all one."

That this sally was received with laughter you will readily believe. Even the ladies could not refrain from merriment, and for them he added other diverting sayings. Then finding the time was nearly up, and wishing the ladies to be well pleased with him when they departed, he said to them—"Now, fair ladies, when you are chatting presently with your gossips, you will be asking one another: 'Who, pray, is this Master Friar, that speaks out so boldly? He must be a brisk fellow.' I will tell you, ladies, yes, I will tell you, and be not astonished if I speak out boldly, for I am of Anjou, at your service."

With these words he ended his sermon, leaving his hearers more disposed to laugh at his foolish speeches than to weep in memory of our Lord's Passion which was then being commemorated. 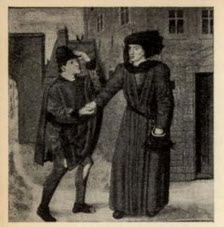 The other sermons that he preached during the festival had much the same value. You are aware that these friars never fail to go begging for their Easter eggs, and receive not only eggs, but many other things, such as linen, yarn, chitterlings, hams, chines, and similar trifles. So when Easter Tuesday came, and the friar was making those exhortations to charity of which such folks as he are no niggards, he said—

"I am bound to thank you, ladies, for the liberality you have shown to our poor monastery, and yet I cannot forbear telling you that you have hitherto not duly considered the nature of our wants. You have for the most part given us chitterlings, but of these we ourselves have no lack. God be praised, our monastery is indeed full of them. What then can we do with so many? I will tell you. My advice, ladies, is that you should mix your hams with our chitterlings; in this way you would bestow fine alms."

Then, continuing his sermon, he brought into it certain scandalous matter, and, whilst discoursing upon it somewhat bluntly and quoting sundry examples, he said in apparent amazement—

"Truly, ladies and gentlemen of Saint-Martin, I am greatly astonished that you should be scandalised so unreasonably at what is less than nothing, and should tell tales of me wherever you go, saying: 'It is a big business; who could have thought that the father would have got his landlady's daughter with child?' A monk get a girl with child!" he continued; "forsooth, what a wonder! But hark you, fair ladies, would you not rather have had cause for wonderment, had the girl acted thus by the monk?"

"Such, ladies, was the wholesome food on which this worshipful shepherd fed the Lord's flock. And so brazen was he, that after committing the sin, he spake openly of it in the pulpit, where nought should be said that tends to aught but the edification of one's neighbour, and above all to the glory of God."

"Truly," said Saffredent, "he was a master monk—I should have liked him nearly as well as Brother Anjibaut, who gets credit for all the jests that are spoken in merry company."

"For my part, I can see nothing laughable in such mockery," said Oisille, "especially in such a place."

"You forget, madam," said Nomerfide, "that at that time, though it was not so very long ago, the good villagers, and indeed most of the dwellers in the large towns, who think themselves cleverer than other people, had greater regard for such preachers as he than for those who purely and simply preached the holy Gospel to them."

"However that may be," said Hircan, "he was not wrong in asking for hams in exchange for chitterlings, for in hams there is far more eating. And even if some devout creature had understood him amphibologically, as I believe he wished to be understood, neither he nor his brethren would have fared badly any more than the wench that had her bag full."

"But how impudent of him," said Oisille, "to pervert the meaning of the text to suit his fancy, thinking that he had to do with beasts like himself, and shamelessly trying to entice the poor little women so that he might teach them how to eat raw flesh at night."

"True," said Simontault; "but you forget that he saw before him those young tripe-sellers of Amboise in whose tub he would fain have washed his ——— shall I name it? No, but you understand me—and have treated them to a taste of it, not roasted, but stirring and frisking, so as to please them the more."

"Softly, softly, Simontault," said Parlamente; "you forget yourself. Have you laid aside your accustomed modesty to don it only in time of necessity?"

"No, madam, no," said he; "'twas the unworthy monk that led me astray. Wherefore, that we may return to the matter in hand, I beg Nomerfide, who caused my offence, to give her vote to some one who will make the company forget our common fault."

"Since you include me in your transgression," said Nomerfide, "I will choose one who will atone for our failings, that is Dagoucin. He is so discreet that to save his life he would not say a foolish thing."