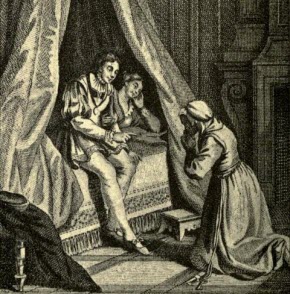 The Duke of Vendōme and the Princess of Navarre, whilst resting together one afternoon, were surprised by an old serving-woman, who took them for a prothonotary and a damsel between whom she suspected some affection; and, through this fine justicement, a matter, of which intimates were ignorant, was made known to strangers.

Tale 66 of the Heptameron

In the year when the Duke of Vendōme married the Princess of Navarre, (1) the King and Queen, their parents, after feasting at Vendōme, went with them into Guienne, and, visiting a gentleman's house where there were many honourable and beautiful ladies, the newly married pair danced so long in this excellent company that they became weary, and, withdrawing to their chamber, lay down in their clothes upon the bed and fell asleep, doors and windows being shut and none remaining with them.

Just, however, when their sleep was at its soundest, they were awakened by their door being opened from without, and the Duke drew the curtain and looked to see who it might be, suspecting indeed that it was one of his friends who was minded to surprise him. But he perceived a tall, old bed-chamber woman come in and walk straight up to their bed, where, for the darkness of the room, she could not recognise them. Seeing them, however, quite close together, she began to cry out—

"Thou vile and naughty wanton! I have long suspected thee to be what thou art, yet for lack of proof spoke not of it to my mistress. But now thy vileness is so clearly shown that I shall in no sort conceal it; and thou, foul renegade, who hast wrought such shame in this house by the undoing of this poor wench, if it were not for the fear of God, I would e'en cudgel thee where thou liest. Get up, in the devil's name, get up, for methinks even now thou hast no shame."

The Duke of Vendōme and the Princess hid their faces against each other in order to have the talk last longer, and they laughed so heartily that they were not able to utter a word. Finding that for all her threats they were not willing to rise, the serving-woman came closer in order to pull them by the arms. Then she at once perceived both from their faces and from their dress that they were not those whom she sought, and, recognising them, she flung herself upon her knees, begging them to pardon her error in thus robbing them of their rest.

But the Duke of Vendōme was not content to know so little, and rising forthwith, he begged the old woman to say for whom she had taken them. This at first she was not willing to do; but at last, after he had sworn to her never to reveal it, she told him that there was a girl in the house with whom a prothonotary (2) was in love, and that she had long kept a watch on them, since it pleased her little to see her mistress trusting in a man who was working this shame towards her. She then left the Prince and Princess shut in as she had found them, and they laughed for a long while over their adventure. And, although they afterwards told the story they would never name any of the persons concerned.

"You see, ladies, how the worthy dame, whilst thinking to do a fine deed of justice, made known to strange princes a matter of which the servants of the house had never heard." 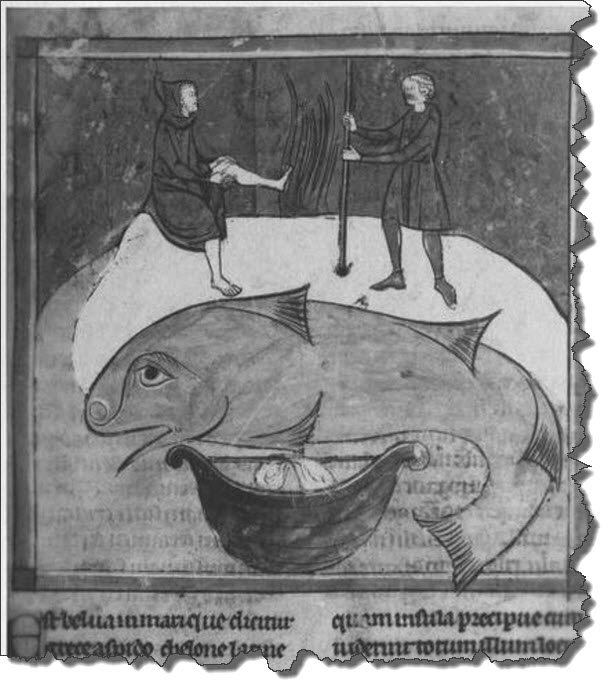 "I think I know," said Parlamente, "in whose house it was, and who the prothonotary is; for he has governed many a lady's house, and when he cannot win the mistress's favour he never fails to have that of one of the maids. In other matters, however, he is an honourable and worthy man."

"Why do you say 'in other matters'?" said Hircan. "Tis for that very behaviour that I deem him so worthy a man."

"I can see," said Parlamente, "that you know the sickness and the sufferer, and that, if he needed excuse, you would not fail him as advocate. Yet I would not trust myself to a man who could not contrive his affairs without having them known to the serving-women."

"And do you imagine," said Nomerfide, "that men care whether such a matter be known if only they can compass their end? You may be sure that, even if none spoke of it but themselves, it would still of necessity be known."

"They have no need," said Hircan angrily, "to say all that they know."

"Perhaps," she replied, blushing, "they would not say it to their own advantage."

"Judging from your words," said Simontault, "it would seem that men delight in hearing evil spoken about women, and I am sure that you reckon me among men of that kind. I therefore greatly wish to speak well of one of your sex, in order that I may not be held a slanderer by all the rest."

"I give you my place," said Ennasuite, "praying you withal to control your natural disposition, so that you may acquit yourself worthily in our honour."

"Tis no new thing, ladies, to hear of some virtuous act on your part which, methinks, should not be hidden but rather written in letters of gold, that it may serve women as an example, and give men cause for admiration at seeing in the weaker sex that from which weakness is prone to shrink. I am prompted, therefore, to relate something that I heard from Captain Robertval and divers of his company."