the Grey Friars Caught and Punished

The older and wickeder of two Grey Friars, who were lodged in an inn where the marriage of the host's daughter was being celebrated, perceived the bride being led away, whereupon he went and took the place of the bridegroom whilst the latter was still dancing with the company. (1)

Tale 48 of the Heptameron

At an inn, in a village of the land of Perigort, there was celebrated the marriage of a maiden of the house, at which all the kinsfolk and friends strove to make as good cheer as might be. On the day of the wedding there arrived at the inn two Grey Friars, to whom supper was given in their own room, since it was not meet for those of their condition to be present at a wedding. However, the chief of the two, who had the greater authority and craft, resolved that, since he was shut out from the board, he would share the bed, and in this way play them one of the tricks of his trade.

When evening was come, and the dances were begun, the Grey Friar continued to observe the bride for a long time, and found her very handsome and to his taste. Then, inquiring carefully of the serving-woman concerning the room in which she was to lie, he found that it was close to his own, at which he was well pleased; and so good a watch did he keep in order to work his end, that he perceived the bride being led from the hall by the old women, as is the custom. As it was yet very early, the bridegroom would not leave the dance, in which he was so greatly absorbed that he seemed to have altogether forgotten his wife.

Not so the Friar, for, as soon as his ears told him that the bride was in bed, he put off his grey robe and went and took the husband's place. Being fearful of discovery, however, he stayed but a very short time, and then went to the end of a passage where his comrade, who was keeping watch for him, signed to him that the husband was dancing-still.

The Friar, who had not yet satisfied his wicked lust, thereupon went back to bed with the bride, until his comrade gave him a signal that it was time to leave.

The bridegroom afterwards came to bed, and his wife, who had been so tormented by the Friar that she desired naught but rest, could not help saying to him—

"Have you resolved never to sleep or do anything but torment me?"

The unhappy husband, who had but just come in, was greatly astonished at this, and asked what torment he had given her, seeing that he had not left the dance.

"A pretty dance!" said the poor girl. "This is the third time that you have come to bed. I think you would do better to sleep."

The husband was greatly astonished on hearing these words, and set aside thought of everything else in order that he might learn the truth of what had passed. 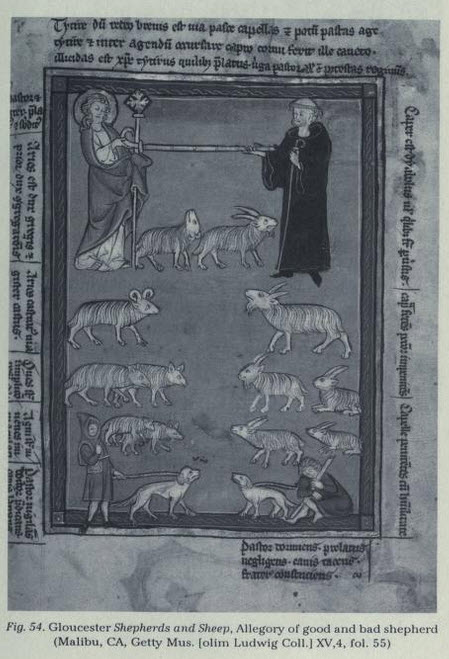 When his wife had told him the story, he at once suspected the Grey Friars who were lodged in the house, and forthwith rising, he went into their room, which was close beside his own.

Not finding them there, he began to call out for help in so loud a voice that he speedily drew together all his friends, who, when they had heard the tale, assisted him with candles, lanterns, and all the dogs of the village to hunt for the Grey Friars.

Not finding them in the house, they made all diligence, and so caught them among the vines, where they treated them as they deserved; for, after soundly beating them, they cut off their arms and legs, and left them among the vines to the care of Bacchus and Venus, of whom they had been better disciples than of St. Francis.

"Be not amazed, ladies, if such folk, being cut off from our usual mode of life, do things of which adventurers (2) even would be ashamed. Wonder rather that they do no worse when God withdraws his hand from them, for so little does the habit make the monk, that it often unmakes him through the pride it lends him. For my own part, I go not beyond the religion that is taught by St. James, who has told us to 'keep the heart pure and unspotted toward God, and to show all charity to our neighbours.'"(3)

"Heavens!" said Oisille, "shall we never have done with tales about these tiresome Grey Friars?"

"If, ladies, princes and gentlemen are not spared, the Grey Friars, it seems to me, are highly honoured by being noticed. They are so useless that, were it not that they often do evil things worthy of remembrance, they would never even be mentioned; and, as the saying goes, it is better to do evil than to do nothing at all. Besides, the more varied the flowers the handsomer will our posy be."

"If you will promise not to be angry with me," said Hircan, "I will tell you the story of a great lady whose wantonness was so extreme that you will forgive the poor friar for having taken what he needed, where he was able to find it, seeing that she, who had enough to eat, nevertheless sought for dainties in too monstrous a fashion."

"Since we have sworn to speak the truth," said Oisille, "we have also sworn to hear it. You may therefore speak with freedom, for the evil things that we tell of men and women are not uttered to shame those that are spoken of in the story, but to take away all trust in created beings, by revealing the trouble to which these are liable, and this to the end that we may fix and rest our hope on Him alone who is perfect, and without whom every man is only imperfection."

"Well then," said Hircan, "I will relate my story without fear."