Thogas's wife, believing that her husband loved none but herself, was pleased that her serving-woman should amuse him, and laughed when in her presence he kissed the girl before her eyes, and with her knowledge.

Tale 54 of the Heptameron

Between the Pyrenees Mountains and the Alps, there dwelt a gentleman named Thogas, (1) who had a wife and children, with a very beautiful house, and so much wealth and pleasure at his hand, that there was reason he should live in contentment, had it not been that he was subject to great pain beneath the roots of the hair, in such wise that the doctors advised him to sleep no longer with his wife. She, whose chief thought was for her husband's life and health, readily consented, and caused her bed to be set in another corner of the room directly opposite her husband's, so that they could neither of them put out their heads without seeing each other.

This lady had two serving-women, and often when the lord and his lady were in bed, they would each take some diverting book to read, whilst the serving-women held candles, the younger, that is, for the gentleman, and the other for his wife.

The gentleman, finding that the maid was younger and handsomer than her mistress, took such great pleasure in observing her that he would break off his reading in order to converse with her. His wife could hear this very plainly, but believing that her husband loved none but herself, she was well pleased that her servants should amuse him.

It happened one evening, however, when they had read longer than was their wont, that the lady looked towards her husband's bed where was the young serving-maid holding the candle. Of her she could see nothing but her back, and of her husband nothing at all excepting on the side of the chimney, which jutted out in front of his bed, and the white wall of which was bright with the light from the candle. And upon this wall she could plainly see the shadows both of her husband and of her maid; whether they drew apart, or came near together or laughed, it was all as clear to her as though she had veritably beheld them.

The gentleman, using no precaution since he felt sure that his wife could not see them, kissed her maid, and on the first occasion his wife suffered this to pass without uttering a word. But when she saw that the shadows frequently returned to this fellowship, she feared that there might be some reality beneath it all, and burst into a loud laugh, whereat the shadows were alarmed and separated. 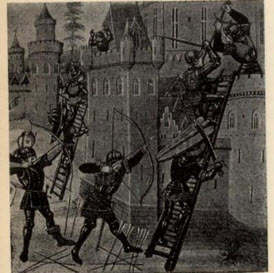 The gentleman then asked his wife why she was laughing so heartily, so that he might have a share in her merriment.

"Husband," she replied, "I am so foolish that I laugh at my own shadow."

Inquire as he might, she would never acknowledge any other reason, but, nevertheless, he thenceforward refrained from kissing such shadow-faces.

"That is the story of which I was reminded when I spoke of the lady who loved her husband's sweetheart."

"By my faith," said Ennasuite, "if my maid had treated me in that fashion, I should have risen and extinguished the candle upon her nose."

"You are indeed terrible," said Hircan, "but it had been well done if your husband and the maid had both turned upon you and beaten you soundly. There should not be so much ado for a kiss; and 'twould have been better if his wife had said nothing about it, and had suffered him to take his pastime, which might perchance have cured his complaint."

"Nay," said Parlamente, "she was afraid that the end of the pastime would make him worse."

"She was not one of those," said Oisille, "against whom our Lord says, 'We have mourned to you and ye have not lamented, we have sung to you and ye have not danced,' (2) for when her husband was ill, she wept, and when he was merry, she laughed. In the same fashion every virtuous woman ought to share the good and evil, the joy and the sadness of her husband, and serve and obey him as the Church does Jesus Christ."

"Then, ladies," said Parlamente, "our husbands should be to us what Christ is to the Church."

"So are we," said Saffredent, "and, if it were possible, something more; for Christ died but once for His Church, whereas we die daily for our wives."

"Die!" said Longarine. "Methinks that you and the others here present are now worth more crowns than you were worth pence before you were wed."

"And I know why," said Saffredent; "it is because our worth is often tried. Still our shoulders are sensible of having worn the cuirass so long."

"If," said Ennasuite, "you had been obliged to wear harness for a month and lie on the hard ground, you would greatly long to regain the bed of your excellent wife, and wear the cuirass of which you now complain. But it is said that everything can be endured except ease, and that none know what rest is until they have lost it. This foolish woman, who laughed when her husband was merry, was fond of taking her rest under any circumstances."

"I am sure," said Longarine, "that she loved her rest better than her husband, since she took nothing that he did to heart."

"She did take to heart," said Parlamente, "those things which might have been hurtful to his conscience and his health, but she would not dwell upon trifles."

"When you speak of conscience," said Simontault "you make me laugh. 'Tis a thing to which I would have no woman give heed."

"It would be a good thing," said Nomerfide, "if you had a wife like one who, after her husband's death, proved that she loved her money better than her conscience."

"I pray you," said Saffredent, "tell us that tale. I give you my vote."

"I had not intended," said Nomcrfide, "to relate so short a story, but, since it is suited to the occasion, I will do so."